What is a Preposition?

Image by Pixabay from Pexels

Prepositions in English are function words that connect to nouns, pronouns, or parts of sentences. They express a relationship to another word, an idea, or clause. For example, when you say the house across the street, the preposition “across” connects “house” to “street” and shows the relationship between them (in this case, a spatial relationship).

English has approximately 150 prepositions that express many different relationships. Some examples of common prepositions include of, to, on, in, about, from, and so on. 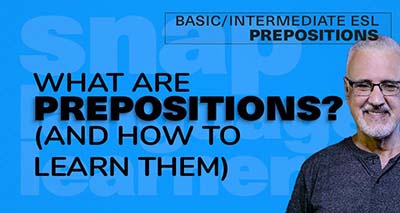 Watch What are prepositions? (and how to learn them) on YouTube and take good study notes.

Note. You can read this page first or watch the video before reading. It’s up to you.

It is often best to learn prepositions as they appear in sentences rather than try to memorize long lists without any context. Of course, as with anything in second-language acquisition, it takes practice. The more you use the language, the more you will read and hear prepositions being used in context. After some time, the correct preposition will “sound natural” in each particular case.

For a complete lesson on learning prepositions, see 5 tips to learn prepositions effectively.

Complete a short exercise to test your understanding of the information on this page and the video activity.