In the previous page, you saw how subordinating conjunctions are used to combine ideas into sentences by embedding a subordinate clause into a main clause.

Conjunctive adverbs work a bit differently. They show the relationships between separate sentences rather than within the same sentence. In addition, they make it possible to express even more relationships. 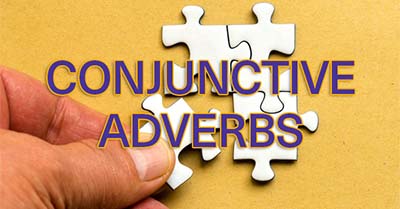 Before jumping right into conjunctive adverbs, let’s brush up on what an adverb is. Adverbs or adverbial phrases are words or expressions that modify a verb, adjective, another adverb, or a whole idea.

In the examples sentences below, the adverbs are in bold.

You can tell from the above examples, that adverbs also have different functions. They can be categorized based on the idea they convey as adverbs of time, manner, place, frequency, duration, degree, and so on.

In Sentence 3, “unfortunately” modifies the whole sentence and expresses an idea of evaluation of the statement.

What Conjunctive Adverbs Are

Conjunctive adverbs are used as transition words in that they connect whole ideas, sentences, even paragraphs together and show the relationship between them. In that sense, they work similarly to adverbs because they “modify” or add information to such ideas, sentences, or paragraphs.

They differ from the other types of transitions we have seen so far in this lesson because they are not limited to connecting two ideas (as with coordinating conjunctions) or to embedding an idea into another sentence (as with subordinating conjunctions) but are free to connect any number of ideas (even ideas that are far apart in a written text).

In this sentence, the conjunctive adverb is “as a result.”

You were late almost every day and rarely offered to help your co-workers; as a result, you will not get the promotion.

Note that the first part of the sentence was completed, and it could stand on its own. The semicolon is used to show that the sentence is over... but not quite, because it has additional information. The conjunctive adverb “as a result” bridges the two parts of the sentence and shows the relationship between them, that is, a result or consequence.

Compare this to the first example.

In this example, the conjunctive adverbs are “in addition” and “consequently.”

You were late almost every day and rarely offered to help your co-workers. Sometimes you knew people needed help, but you never offered to help. In addition, your overall attitude needs work as you often got into altercations with coworkers and even clients. Consequently, you will not get the promotion.

This paragraph starts with two ideas in separate sentences. The conjunctive adverb “in addition” shows that more information is added to them.

As a conjunctive adverb, “consequently” connects all the preceding information to the final statement.

You could also use a subordinating conjunction as in (4) “You will not get the promotion because you were a terrible employee.”

Coordinating and subordinating conjunctions cannot handle it when you have much more information to connect. Conjunctive adverbs are needed in such a situation.

The conjunctive adverbs are highlighted in bold in the example sentences below:

Finally, Devices that are Too Cool for School

Next, you will learn about some sophisticated transition devices that you typically do not learn in school. Use the “Navigate This Lesson” button below and continue the lesson.