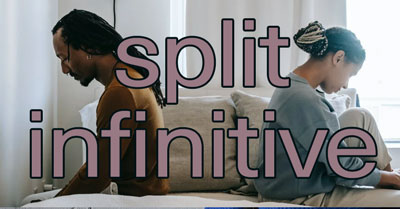 You may have heard this rule before: “Don’t split the infinitive in English.” To follow this old rule, sometimes you will end up creating some very awkward sentences.

The good news is that this rule is no longer as strict as it used to be. Even in academic writing, “broken” or ignored for the sake of clarity. Let’s examine what the split infinitive is, why you should no longer worry too much about it, and how you should break it to write clear sentences.

Infinitives in English have two forms, a bare infinitive (e.g., go, speak, work) and to-infinitives (to go, to speak, to work).

In some constructions and particularly after modal verbs (e.g., can, could, may, would, should), you use bare infinitives.

In some constructions and after certain verbs (e.g., fail, want, mean, pretend), we use to-infinitives.

The rule many writers have learned is simple: “Do not split infinitives in English,” that is, do not put anything between “to” and the verb.

If You Choose to Follow the “No Split Infinitive” Rule

If you decide to follow the “no split infinitive” rule, you generally end up with good sentences.

What Is the Problem Then?

Sometimes you may end up with an awkward construction or unclear sentence. You may be forced to rewrite the whole sentence just to avoid breaking the rule or accept that your “correct” sentence is a bad one.

The idea is that we needed to leave calmly—rather than in a panic.

Revised Sentence 1 above is ambiguous. It can easily be interpreted as the security guard having done something calmly, but that is not the intended meaning.

Revised Sentence 2 can also be interpreted as both we were to leave calmly or the security guard asked us calmly.

Solution: Ignore the rule and stick with the original sentence despite its split infinitive.

The idea is that students should review their lecture notes continually—rather than sporadically.

As with the sentences in Revision 3, both revised sentences can be interpreted incorrectly to mean that the instructor did something continually.

Solution: You are better off ignoring the rule and sticking with the original sentence despite the split infinitive.

Final Solution: Treat It As a Myth

The main problem with the rule is that there is actually no problem. “Split infinitives do not sound good” or “they are awkward” are not valid justification to not split infinitives, which “do not sound right” only to people who dilligently follow this rule.

Although language changes over time, overzealous grammarians resist change. They perceive updating grammar rules as corrupting the language. That is probably why the “no split infinitives” rule persists even though English speakers have been splitting infinitives for centuries.

If you are a student or work someplace where you must not split infinitives, don’t. You are likely not in a position to change your professor’s mind or revise your company’s style guide. It’s not worth the fight.

It is also important to follow certain “rules” because they make sense and result in better written work. For example, there are good reasons to avoid the third person in formal writing.