“There is” or “there are?”
Confusing even for native speakers

The verb there to be is a bit different in English. In general, the subject of an affirmative sentence is placed before the verb, which agrees the subject in number. For example,

However, there be is placed at the beginning of a statement, thus it is followed by the subject, which the verb must agree with.

There is a man waiting for you outside.
(subject: a man; verb: there is.)

Lists of Items: A Special Case

Although this singular-plural–subject rule seems simple enough, there is a complication. When listing items, you can either make there be plural (after all, there are multiple items on a list), or you can make it agree with the first item on the list. For example,

There are a man, a woman, and two children waiting for you outside. or

There is a man, a woman, and two children waiting for you outside.

In the first sentence above, the idea is that the whole list is the subject, so the verb should be plural. However, as this is a list, you can argue that you should make the verb agree with the first item. (The video listed in the Video Activity on this page goes into further detail about the rationale for doing so.)

However, it seems you would always say,

There are two children, a man, and a woman waiting for you outside.

because you could apply either rule (i.e., the list is plural or the first item is plural).

Even when the subject of there be is clearly plural, speakers tend to use the singular form of the verb. You will often hear sentences such as

“There’s times I just want to stay home” instead of
“There are times...”

In formal, written English, using there’s regardelss of the subject should be avoided. In fact, using there be often results in wordy sentences that can be rewritten. The video listed in the Video Activity below explores this writing style issue. 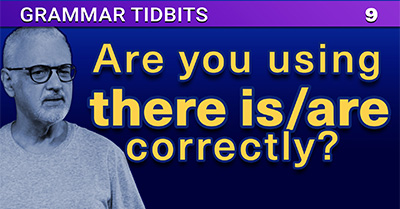 Watch “There is” or “there are?” Confusing even for native speakers on YouTube for further information and examples on this topic.

Other Forms of the Verb

Keep in mind that whatever rule you apply for “there is” or “there are” (i.e., conjugating the verb in the present simple tense) applies to any other verb tenses and constructions in which the distinction between singular and plural forms exist.

There have been a few incidents this month.
(plural subject: incidents)

There has been only one case of the illness in this region.
(singular subject: one case)

There are going to be many changes once the new director takes over.
(plural subject: changes)

In combination with “seem” and “appear”

There be is often used in combination with verbs such as seem, appear, have to (meaning “must”), and so on.

There does not seem to be any reason to pursue this course of action.
(singular subject: reason)

There does not seem to be any reason to pursue this course of action.
(singular subject: any reason)

There appears to be a great need for change in Congress.
(singular subject: need)

There appear to be several conflicts of interest in the Senator’s political agenda.
(plural subject: conflicts)

Practive What You Have Learned

Practice 1. Use there to be in simple sentences.

Practice 2. Use there to be with other verbs in complex sentences.