Subject-Verb Agreement with Fractions and Percentages

In a lesson about simple and complex subjects, The simple subject is the main word or words that refers to the grammatical subject of the sentence (i.e., the person, place, thing, or idea that does or is something). The verb must agree with the “core” or main part of the subject, that is, the simple subject.

You should be careful when a subject involves a fraction or a percentage. If you apply the incorrect logic, you may think the subject is singular when it is actually plural, which means the verb must be plural as well. 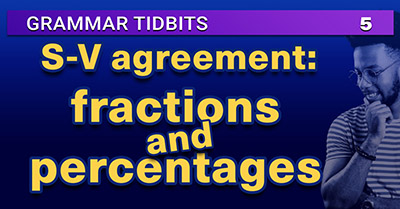 Watch Should you say I'm good or I'm well on YouTube for further informaiton and examples on this topic.

Subjects with Fractions and Percentages

one-third of the students,

three-quarters of the water,

Below are examples of sentences containing singular and plural subjects with fractions. Note that singular fractions or percents refer to countable things, and singular ones refer to a mass, substance, abstract concepts, or nouns denoting singular entities.

To learn how to identify singular and plural simple subjects, see Simple and complex subjects and subject-verb agreement.