Grammar and the Language Learner

... continued from the previous page.

In online feuds, I have often seen language learners get confused. Speakers of English as a second or foreign language point out that they have to know the grammar in order to learn the language. When descriptivists voice their opinions (usually in response to someone’s overt language bias), they sometimes come across as saying we should not follow (standard) grammar at all so you are not bigoted. (In fact, that is rarely what they are actually saying.)

Well, language learners do not want to “sound uneducated or stupic,” nor do they want to be bigoted. What a confusing mess.

Perhaps this is a problem with messaging. Both prescriptive and descriptive grammar play a role in understanding and learning the language.

Prescriptive grammar itself is fine. Especially for those learning the language, it gives you a set of rules to follow. It seems that the real problem lies in not recognizing that many standard grammar rules are simple conventions and in using prescriptive grammar to discriminate against entire linguistic groups.

Descriptive grammar is a useful tool to understand language. Language learners can learn about language varieties and registers and learn to appreciate the complexity of language and society. Perhaps the problem is that some who call themselves descriptivists do not understand that descriptivism is just an approach to understanding language, not a tool to disregard any form of grammar as “bad.” Their effort should be on dispelling linguistic biases and prejudice.

What to Do Then?

If you are a language learner getting caught in the middle of confusing, biased messages, perhaps your best course of action is to keep your own biases in check and listen closely to the messages people may be selling you about language and grammar.

Learn the basics of the language and build your proficiency from there. This means you will learn standard grammar—and lots of it—. You have to, especially if you plan to take a language-proficiency test. As your proficiency improves, you will eventually learn different ways of expressing ideas. These will sometimes conflict with what you are learning in textbooks. Accept it, keep learning, and at some point things will make better sense.

Part of advanced language proficiency is knowing “the rules for breaking the rules.” Such a proficiency level takes time, but you will get there eventually. You can make your language-learning experience richer and more fulfilling if you accept language for what it is and experience the richness of all its varieties—including standard grammar. 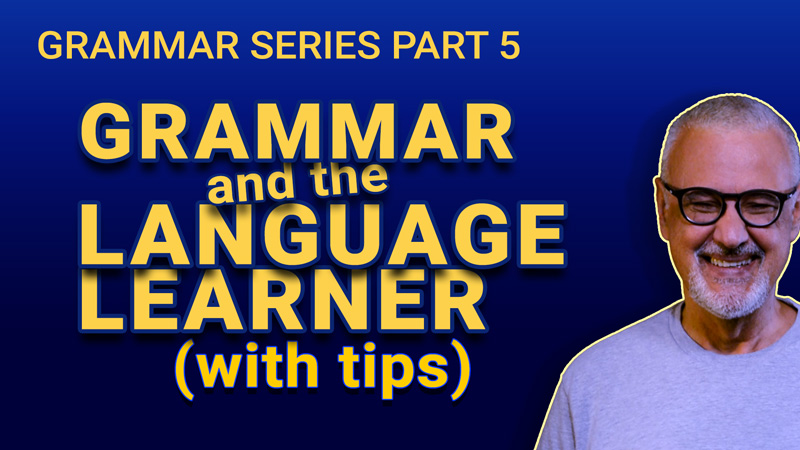 Watch Grammar and the Language Learner on YouTube and take good study notes.

Although much of the focus in the video is on English-language learner, the information applies to learners of any language.

If you're currently in a second- or foreign-language course, ask your language instructor discuss the information on this page and the above video. Your instructor and classmates may have ideas you disagree with; keep an open mind and be respectful.