Modal verbs are used along with verbs to add nuance to action, event, or state the verb expresses. In that sense, modal verbs preserve the meaning of the verb but also add some “flavor” to it.

This lesson presents a comprehensive list of modal verbs in English and the possible meanings they add to the verb. 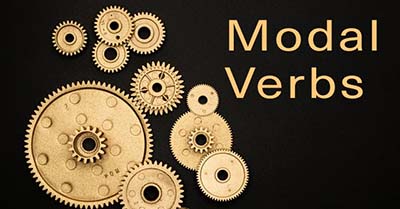 Modal verbs and time of the action or state

Other details about modal verbs

In a statement such as “John speaks French,” the verb (to speak) is in the present simple tense and expresses some factual information about John. You can add a modal verb to the verb and add nuance (or modality) to the statement.

What if you want to express that such factual information is possible though you are not completely sure? You can use the modal verb may for that as in “John may speak French.”

Modal verbs are auxiliary verbs in the sense that they allow subject-verb inversion (for example, to ask questions). They can also be used with not in negative statements.

However, auxiliary verbs such as do and does or the verb to be (e.g., to be going to do something) are used simply to conjugate the verb whereas modal verbs also add nuance to the meaning expressed by the verb.

2. Can you speak French?

In Sentence 1, do is an auxiliary verb used with speak to indicate the present simple tense.

Similarly, in Sentence 2, the modal verb can has a dual function. As an auxiliary verb, it allows you to ask a question. As a modal verb, it conveys the idea of an ability to perform the main verb (speak).

If you think the difference between Sentences 1 and 2 above is subtle, you are right. However, you can use a modal verb and change the idea quite a bit depending on the context.

Modal verbs and differences in meaning

For example, compare the following sentences:

2. John must eat breakfast every morning.

3. John should eat breakfast every morning.

Sentence 1 has no modal verb; the verb eat simply expresses a habitual action.

In Sentence 2, the modal verb must expresses quite a different reality. It expresses the idea that eating breakfast is a necessity for John. Perhaps John does not feel well unless he eats breakfast, so he must do it every morning.

In Sentence 3, the modal verb should expresses the idea that eating breakfast is recommended for John. It appears that John does not eat breakfast every morning, but it would be a good idea if he did.

There is no one-to-one correspondence between a modal verb and the modality it expresses. The same modal verb can express more than one idea depending on how it is used.

Modalities Expressed with “will”

It should be stressed that differences in meaning quite often depend on the context in which the modal verb is used. “I will be there,” for example, could take on different meanings depending on the situation.

He needs to come back tomorrow.

Does he need to come back tomorrow?

He doesn’t need to come back tomorrow.

Note that some semi-modal verbs (e.g., need) can also be used as an auxiliary verb, that is, without the need of another auxiliary.

Need I come back tomorrow?

You needn’t come back tomorrow.

Dare can also be used as a modal verb or as a non-modal verb:

Dare we say anything? (“dare” used as an auxiliary)

Do we dare (to) say anything? (“dare” used with an auxiliary)

We dared not say anything. (“dare” used as an auxiliary)

We didn’t dare (to) say anything. (“dare” used with an auxiliary)

Modal Verbs and Time of the Action or State