Present Tense of the Verb to Be | Page 1

When you cannot use contractions

Connecting ideas and other uses

Practice conjugating “be” in the present 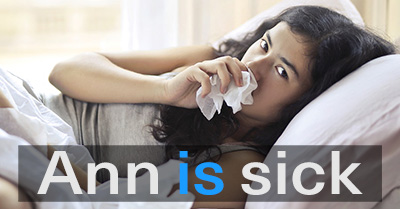 In this lesson, let’s learn about “to be” in the present tense.

Conjugation in the Present Simple Tense

With singular and plural pronouns

no one, nobody is

Note. “No one” and “nobody” have the same meaning.

I am a student.

Samira is from California.

She is from California.

Japan is in Asia.

It is in Asia.

You and I are good friends.

We are good friends.

Everyone here is a student.

No one is sick.

Negative of “Be” in the Present

To make the verb “be” negative, you place “not” after it.

To make “everyone” negative, you usually put “not” before it.

I am not a student.

Samira is from California.

She is not from California.

Japan is in Asia.

It is not in Asia.

You and I are not good friends.

We are not good friends.

Not everyone here is a student.

Especially when you speak, you often contract the conjugated verb “to be” with the pronoun. That means the pronoun and the verb become one word. Contractions between the verb and “not” are also common when you speak.

Contractions between is and nouns are common when you speak and sometimes in informal writing. Do not use it in formal or academic writing.

When you contract is and not not, you get isn’t.

When you contract are and not, you get aren’t.

When you contract am and not, you get ain’t, but this word is not accepted in standard grammar. If you are taking an English test, for example, do not use “ain’t.”

It is considered “bad English,” but many people use it depending on the variety of English they speak. You hear it in music and poetry, but it is not used in standard English.

Asking and Answering Questions with Be

To ask a question with “be,” put the verb before the subject. To answer a question, use the correct form of the verb.

Look at the following examples with questions and short answers.

When You Cannot Use Contractions with Be

Continue the lesson to learn when you cannot use contraction with the verb “to be.”