There are only three articles in English: “a,” “and,” and “the.” These are very short words, but they can change the meaning of a word or sentence.

If your language has definite and indefinite articles, you understand what they do. The problem is that the rules in English and in other languages can be very different. 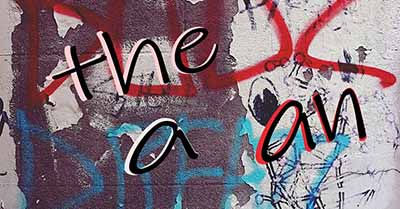 There are some rules telling you when to use definite or indefinite articles, but the best way to get it right is to “get a feel for it.”

In this lesson, you will learn how to use definite and indefinite articles in English.

English has three articles: “the” (definite article) and “a” or “an” (indefinite article). Articles are used before nouns (for example, the building, a child, an elephant.

Perhaps the best way to understand the difference in how to use the definite indefinite article is to look at an example.

John: — I’m hungry. Do you have something to eat?

Kate: — Yes. I have an apple and a banana. Which one would you like?

In the second sentence, Kate is talking about an apple and a banana that is not specific; they are just some fruit that she has. That is why she used the indefinite articles “a” and “an.”

In the last sentence, John is talking about a specific apple. It is not just some apple; it is the apple that Kate said she has.

In this example, notice how the articles change from “a” (to talk about something that was not mentioned before) to “the” (to talk about the same thing after it was identified or specified):

Let me show you a picture. Can you see it? It is below this paragraph.

In the picture, you can see a cat and a dog.

The cat is on the left side of picture. The dog is on the right.

Continue the lesson to learn other rules for articles.