In this passage, Franco explains the difference between accents and idiolects and discusses the sociolinguistics implications of our stereotyped perceptions of accented speech. What is the possible negative impacts of our perceptions of how people speak, particularly for speakers of non-prestige language varieties?

We all intuitively know an accent when we hear one. Yet, what we refer to as “an accent” is fairly complex. Besides, what we hear as an accent or “just the way someone talks” is based on our perceptions, and much of it is based on our socialization with different varieties of the language.

In addition to the main points in this article, I present some personal experiences I have had with my own idiolect in this video, “Accents and idiolects” (Franco “Accents and Idiolects”). 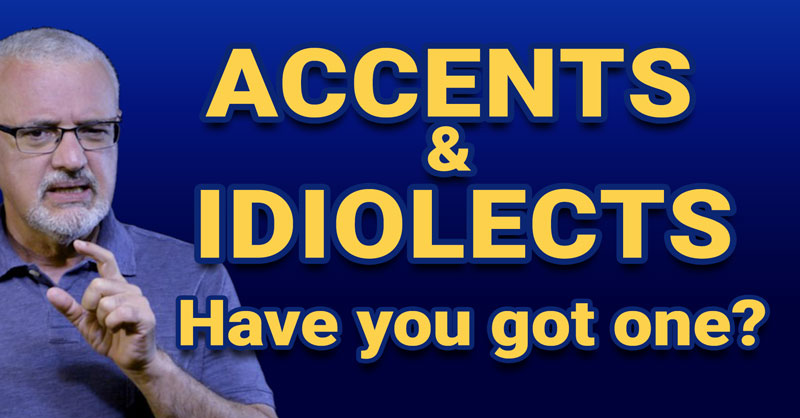 What’s in an Accent?

An accent is a distinctive way of speaking a language. Your accent affects not only how you pronounce vowels and consonants but also suprasegmental features such as your intonation and rhythm. Some accents tend to have little variation in, say, vowel length and pitch, which we may perceive as “flat;” others have greater variation, which makes them sound more “melodious.”

What we call “an accent” gets muddled with other features in the language variety such as lexical and grammatical differences. For example, in some parts of the United States, people who have a particular accent also use the expression “y’all” to express the plural “you.” Others use “fixing to” (as in “I’m fixin’ to leave” or even “I finna leave”) to express the future tense. In a way, it is difficult to address an accent without also addressing these other differences.

An idiolect is a way of speaking that is particular to the individual. Some people call them “someone’s mannerism” (though that may be an offensive term). Idiolects are different from accents in that you can share “an accent” with someone but have an idiolect regardless of the accent.

Think of the way President George W. Bush or President Barack Obama speaks. Regardless of their accents, you can identify their idiolects very quickly because of how they stress certain words, how they pause between words, how they use rhythm and pitch, and so on. In fact, a comedian trying to imitate a celebrity tries to reproduce their idiolects as closely as possible. (Listen to Barack Obama's speech in 2007 and notice, for example, how he pauses between parts of the sentence.)

Interestingly, people are generally unaware of their accents and idiolects until someone points them out. (Unless you are a linguist who is tuned to accents and idiolects and listen to yourself frequently, as would be the case with a linguist in the media.) In a way, an accent becomes an accent when people outside the linguistic group notices differences. Some people may not think they have an accent or idiolect even after someone points it out.

In addition, accents have a sociolinguistic component. They are used as markers of group membership, which could signal geographical origin and even social and ethnic group memberships within the same area. As a result, accents often trigger the stereotyped perceptions, associated with prestige and non-prestige linguistic groups.

In this context, linguistic prestige refers to the social value attached to certain languages and dialects. A prestige language variety and its speakers are regarded better than or superior to those in a non-prestige group. Such prestige or non-prestige is based on stereotypes triggered by categorizing the speaker as a member of a particular linguistic group.

Sometimes people use others’ accents or idiolects to make fun of them, as in two friends trading “harmless” banter. Nonetheless, we should remember that the way we speak is very personal. Our accents and idiolects are part of our social and psychological identities, even if we are unaware of them. Making a mean or hurtful comment about someone’s way of speaking can be discriminatory and harmful. Even comments we may deem as benign (as, for example, “Oh, I love the way you talk”) could be interpreted negatively by the person on the receiving end. (See PBS NewsHour “We Stigmatize Accents.”)

Just be mindful. When in doubt... just don’t.